WHAT IS ACROYOGA
Acroyoga is the fusion of three wonderful disciplines: Yoga, Thai massage and acrobatics, each of these disciplines brings its richness and depth to the practice, resulting in a practice not only of movement, but of sensitive communication, connection, trust and game
“Our highest goal is to bring people closer to a state of union with themselves, with each other and with the divine. From a space of mutual support, the true being can be realized, celebrated and shared for the benefit of all ”explains Jason Nemer and Jenny Sauer-Klein, practitioners and diffusers of acroyoga.

Solar phase: The acrobatics cover the solar phase, in which the body figures of elevation and positions of mutual balance are carried out that help us to develop confidence in ourselves, strength and bring the fun of acrobatic activities.
Moon phase: It covers the most therapeutic part since the Thai massage and includes the initial stretching and Thai massages that are done at the end. In this practice we work on letting go, compassion and listening.
Awareness: Yoga, brings us the cultivation of consciousness led to the connection with the other, balance and breathing. Yoga is the link between solar and lunar practices. 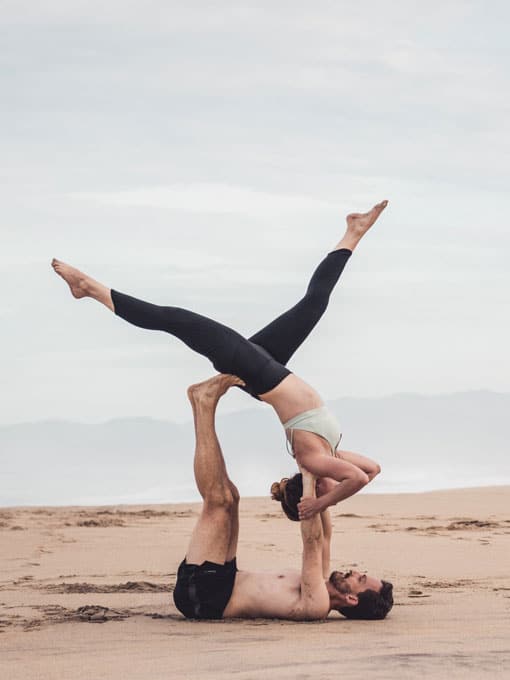 How is acroyoga practiced?

During practice each person has a role:

What are the benefits of acroyoga?

An acroyoga session includes individual yoga, couple yoga and communal yoga. Game dynamics are created, to unite teamwork, to work fear, while individual yoga has more to do with internalization and meditation. Among the benefits of the practice are the following:

What activities are carried out in the practice of Acro Yoga?

Acroyoga contains not only acrobatic elements, but also yoga asanas combined, as well as simple exercises for interaction, which are necessary in situations where newcomers may feel uncomfortable. Some important points of practice are:

Its creation cannot really be attributed to a single person, but to a series of explorers who contributed to create it:

At first, the relationship of the dancers was based on competition. Jesse and Eugene performed numerous dance improvisations between them, trying to identify which one was “cooler”. After much discussion about race, sexuality and the problems of humanity as a whole, they realized that they were united in much more than they could have imagined at the beginning.
The competition was over. Jesse and Eugene decided to combine their work. This is how «Special Mix» was born, whose objective was to completely change the stereotypes of not only scenic art, but also of life itself. The combination of contrasting dance forms with acrobatics, work with masks, martial arts, object manipulation, as well as the direct participation of the audience in the presentation, gave a truly revolutionary experience.
In 1998, yoga was added to this “mix.” Although Jesse and Eugene initially started practicing yoga just to improve their performance skills, yoga soon became the main focus of their attention on performances and life. Yoga changed its existence, and in 2004, together with Alison Yulan, they became founders, co-owners and directors of the Ashtanga Yoga Montreal center.

The word AcroYoga was coined earlier in Canada than in the US. But it cannot be recognized that it was Jenny and Jason who did much to spread this practice around the world and were very successful in this. On the other hand, this success was reinforced by all the efforts of its predecessors, as well as by the fact that the right moment came when the practice “matured.”
Regarding the complex issue of the relationship between Americans Jenny and Jason with the pioneers of the Canadian word AcroYoga Eugene and Jesse, Jesse writes about this: “We raise three children and run a yoga school. Our hobby and our passion is this AcroYoga. When we have time to do this kind of art, it is for us a sacred holiday and, at the same time, a moment of joy and fun. Our AcroYogi form was born organically from dance. We did not create anything new, all we did was put our way of expressing ourselves in those forms of movement that already existed in the Universe since the beginning of time. To declare the natural process as our property is against all the principles we support. ”