WHAT IS VINYASA YOGA?
The base is the movements, whose repetition helps to connect the asanas, vinyasas to each other. When performing asanas, proper breathing is important, as are the breathing exercises that accompany vinyasa yoga. To achieve excellence in this style, you must devote a lot of time to classes every day. Vinyasa yoga is primarily a transformation of the body and consciousness.
Vinyasa yoga consists of 6 main series. The series are sets of exercises aimed at certain objectives. What characterizes Vinyasa yoga is a combination of movement with breathing: inhaling is one movement, exhaling is another. Due to this synchronization, the set of asanas becomes a single stream, and the practice becomes meditation in motion. The key rule of vinyasa is that the movement follows the breath. The movement begins with the beginning of breathing and lasts as long as inhalation (or exhalation) lasts.

“Breathing tells me how fast I have to move,” explains David Robson, director of the Ashtanga Yoga Center in Toronto
When performing asanas of the Vinyasa technique, a special concentration of attention is necessary. This technique is called drishti. When we direct the focus, first from the eyes and then from the attention, we are using the yogic technique called drishti.
When we keep a drishti, we keep the direction of the gaze still. That look should be soft, allowing the muscles involved in it to be relaxed, while those involved in the asana hold the posture without stressing those that are not necessary. 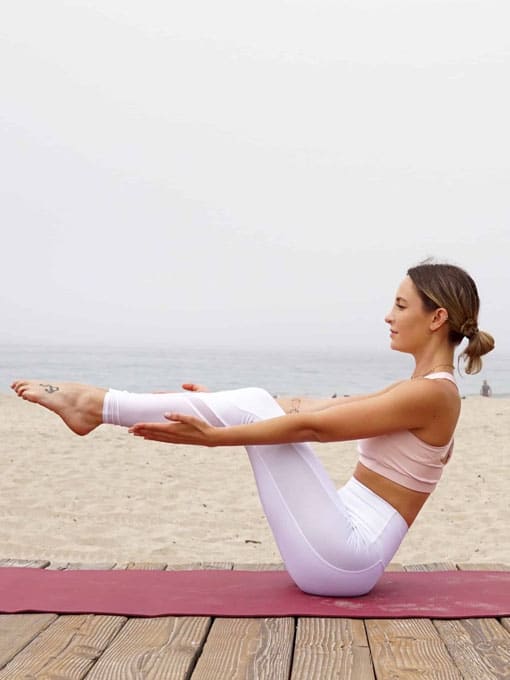 What does Vinyasa mean?

The word “vinyasa” itself consists of two parts: “vi” (“in a special way”) and “nyasa” (“placement” or “placement”). Literally from Sanskrit it can be translated as “stacking in a certain order”.

What is the philosophy of Vinyasa yoga?

The Vinyasa is accepted as a practice to the philosophy of yoga has the following properties:

Yoga can be considered as a way to release awareness of false identification with a specific physical shell. In other words, this is the discovery of the spiritual vision, returning the “I” to its true nature. You can also say that yoga destroys the existential suffering of the mind, which is born from addiction to identify as an individual, isolated from the rest of the world.

What are the benefits of Vinyasa Yoga?

Cleaning is the main effect of doing vinyasa yoga. Proper breathing and exercises lead to the appearance of “internal fire” in the human body.

The yoga master Sri Tirumalai Krishnamacharya, thanks to whom yoga spread widely in the West, expressed. “Just as music without shruti and laya will not be pleasant to listen to, the practice of asanas without vinyasa krama will not give good health” in the book “Yoga Makaranda”. Vinyasa is the basis of his teachings. Krishnamacharya obtained information about her from the ancient text “Yoga Corunt” and directly from her teacher in Tibet. According to him, there are 3 to 48 vinyasas in each asana. According to his teachings one should only breathe through the nose, and it is essential that the movements of inhaling and exhaling should have the same length
Krishnamacharya dedicated the first 40 years of his life to the study of Indian philosophy, Ayurveda and Yoga. His thirst for knowledge led him to study at the best universities and seek out the best teachers. When he heard about a great yoga master in Nepal, he did not hesitate to travel all the way to Mount Kailash, where he met Sri Ramomohan Brahmachari, who lived in a cave. Sri Ramomohan accepted Krishnamacharya as a student and there he remained studying yoga for more than seven years. At the end of his apprenticeship, Sri Ramomohan asked Krishnamacharya to start a family and teach Yoga. And he followed him to the letter, to the last breath, at the age of 101.

Krishnamacharya, after passing an exam, became the yoga master, physician and spiritual advisor to the Mysore marajah and founded a yoga school there. During this period Krishnamacharya taught B.K.S. Iyengar and Patabhi Jois as children, who would later become world famous yoga teachers.

How many postures or asanas does Vinyasa Yoga have?

The hierarchy of Vinyasa Yoga training sequences consists of six basic levels of increasing complexity. Information on the first five levels is available: films have been released where the most experienced Western students of Pattabhi Jois: David Swenson, Richard Freeman, Tim Miller, Lino Miele and others perform asana sequences on different levels.
The first 2 series are suitable for beginners, and the ones we will detail here.
The first series is called “chikitsa yoga” which means “yoga of healing diseases”. It is intended for beginners and includes basic asanas that allow you to heal the body and the body. Most practitioners find that with continued practice, their weight decreases, mood improves, and sense of well-being improves, as do the organs of the gastrointestinal tract. Most poses have a stimulating and beneficial effect on blood circulation, leading to the elimination of toxins.
The second series is called “nadisodhana” which means “purification of the energy channels”. It helps to heal the nervous system. Both are basic. Anyone who has been able to master them gets a harmonious life, a stable nervous system and an emotional environment, as well as good health.