WHAT IS YIN YOGA

Yin Yoga allows you to deepen the more subtle aspects of hatha yoga. Giving space and time, prioritizing stretching and delivery to the corporeality.

It expresses the deepest and contemplative side of yoga, approaching meditation, depth and immobility and works with the energy opposite to Yang Yoga that represents action, superficiality and movement. In many cases, Yin Yoga represents the antithesis of what we now conceive as a typical yoga class. Yin Yoga is a focus on the practice of more traditional yoga; Hatha Yoga
From the eastern perspective, the yin and yang energies are complementary. Yin will be relatively rigid connective tissues (tendons, fascia and ligaments). The aspects that define this energy are stable, immobile, feminine, passive, cold and in downward motion. On the other hand, yang is changing, mobile, masculine, active, hot and ascending and is linked to the most mobile and flexible muscles and blood. 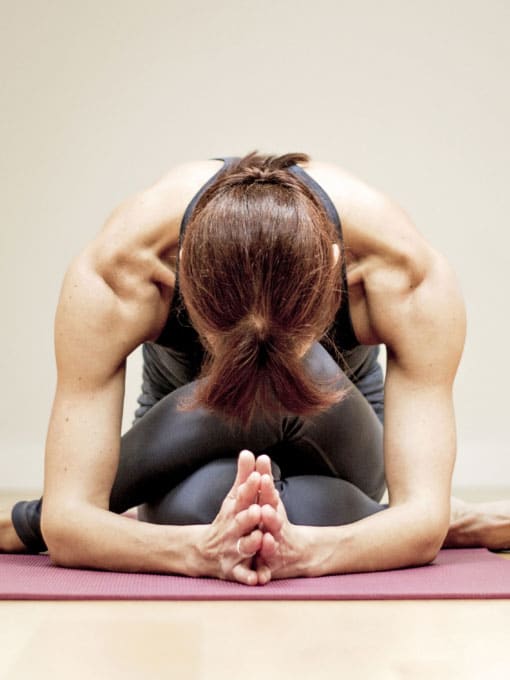 And what makes it different?

To help maintain asanas, supports such as bricks, cushions or blankets are used. In bioneuroemoción fascias and connective tissue correspond to the second biological stage, the protection stage, and connects us with the basic emotions of home and survival. Consciously relaxing muscle armor positively influences our way of processing information from outside and emotionally integrating our experiences. In addition, this type of exercise is optimal for mobilizing our joints and helps prevent bone weakening. The maintenance of fascia and flexible connective tissue helps us to perceive our light body.
Improve your flexibility by allowing your muscles to stretch deeply
Improves the state of our joints providing greater circulation of synovial fluid
Deeply relax the nervous system

It allows us to enter a state of deep meditation where our body accompanies the mental process. The goal is to release the connective tissues and joints in depth to eliminate all the tensions accumulated throughout the day, empty the mind and rebalance the energy.

It is a regenerative practice since it is done with minimal muscular effort and gives the body the opportunity to open, soften and leave tension without much energy investment. It is a highly recommended practice to balance our lives that are too busy since, through the asanas, it does not physically and mentally dispose us to become more receptive, yielding to gravity, relaxing and opening ourselves with acceptance, freeing us from the need for goals, surrendering to the now .

Deep energy nutrition through prana allows revitalizing the organs, pacifying the mind and also working on the structure of connective tissue, tendons and ligaments.

Do you have Yinster wood? For whom it is recommended

It is ideal for people with stress problems as it helps temper emotions and release the tensions associated with each organ. It is also ideal for people suffering from back and hip pain. On a physical level, it provides greater flexibility, relief of joints and ligaments and better blood circulation.
Yin Yoga can be a fantastic meditative experience divided into short 5-minute series of meditations. The changes in the asanas transport us internally keeping the mind focused without losing ourselves in the excess of action that could involve a dynamic practice of Yoga. It offers us through the external stillness of each posture a unique internal journey to explore.

What does Yin mean?

Everything in the Universe has its opposites: this is the main postulate in the philosophy of Yin and Yang. In China, the Yin-Yang circle is called the circle of existence: “Tai Shi.” Managed by the Moon, Yin’s energy is receptive and slow, associated with the feminine. It always moves down, therefore, it is represented as a black inverted drop in the Yin-Yang symbol. The black color symbolizes an internal and intuitive understanding of all the complexity of life.

In each of us, regardless of gender, there are energies, both feminine (Yin) and masculine (Yang) and the balance of these energies depends on the physical, emotional and mental balance. When we designate as feminine, we do not refer to gender, but to the type of energy. The yin energy is not manifest, it is linked to darkness, twilight, receptivity, the hidden and mysterious, since the nature of yin energy is deep and unconscious in us, everything that is hidden in the depths of our psyche, consciousness and soul The yang energy and its masculine principle, on the contrary, is all manifest, it is the power of the mind, while the feminine is the power of intuition and emotions.

Yin, the feminine energy corresponds to:

What is the philosophy of Yin yoga?

When practicing yin yoga classes, a series of principles must be observed:

Yin Yoga has its origins in an ancient style that has been practiced for many centuries in Asia. This system is a symbiosis of Indian and Chinese cultures. Another name with which he is known is Taoist yoga. Baby of Hatha Yoga and Taoism. Kung Fu’s former teachers taught their pupils yoga to activate the movement of energy in the body, which contributed to the better development of martial arts by students. This yogic trend acquired a modern look in the 1980s by Paul Grilley. Grilley was a student of the Taoist yoga teacher and martial arts specialist Pauli Zink. He also taught Ashtanga and Bikram Yoga and had his own yoga studio. In 1989, Grilley met Hiroshi Motoyama, a Japanese scholar and yogi, who had researched the physiology of traditional Chinese medicine and had written a lot about meridian physiology and qi or subtle energy. He related these concepts of Chinese medicine with those of Hindu yogic philosophy, which identified nadis and chakras as channels for prana flowing through them. Grilley created yin sequences with similar objectives to those of an acupuncturist fusing both theories by deepening static practice and the execution of outdoor asanas. One of Paul’s students, Berkeley Sarah, learned the basic principles of Taoist yoga and began teaching yoga, emphasizing the execution of static asanas and calling her lessons “yin yoga.” A year later, Paul Grilley published his own book, entitled “Yin Yoga: talking about the main practices.” Paul Grilley classifies muscle development practices as the element of yang, and practices centered on connective tissue as the element of yin..